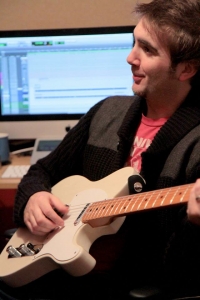 Anthony Gibney is a producer, engineer and mixer based in Ireland.

From 2009 until 2012, he worked in studios in New York such as Electric Lady Studios, Dubway Studios and Thump Studios. During this time, he engineered and assisted for many artists, producers and engineers such as Ray Davies, Julian Casablancas, Michael Brauer, Kelly Clarkson, 30 seconds to Mars, Train, Bernie Worrell, John Siket, Chris Shaw and Chip Taylor, to name but a few, as well as engineering for T.V. shows such as VH1 Unplugged, Live from the artist den and Slapback Jack.

In 2013, Anthony opened Audioland Studios in Leixlip, Co. Kildare. He has also recorded at other Dublin studios such as Westland Studios and Camden Studios.
Since 2013, he has worked with many artists including Kila, Nick Kelly (The Fat Lady Sings), Josh Ritter, Paul Noonan (Bellx1), Adam Marcello (Katy Perry), Dave Hingerty (Kila, The Frames, Paul Brady) and Jane Willow.
Anthony has also recorded and mixed audio for films such as the award winning “The Drummer and the Keeper”, Kila’s “Pota Oir” and “Outitude” which have been screened worldwide and T.V. shows such as “Modern Family”.
His recordings has been played on many Irish radio stations such as RTE Radio1, KCLR, Today FM, Newstalk, Lyric FM and BBC Radio Ulster.

He is comfortable working in a wide range of genres as you can hear on the MUSIC page.